How NightWatch changed my life

Firstly I want to introduce myself. My name is Danny Reiffers, I’m 36 years old and live in the Netherlands. I have two stepsons and a daughter named Isabeau; who has severe developmental delay and epilepsy. 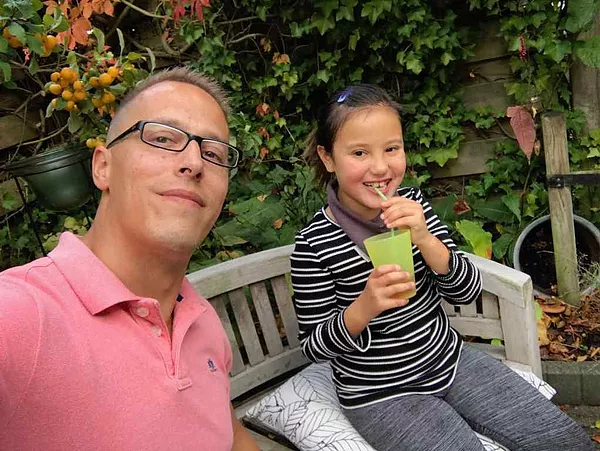 It’s around Christmas time, which is usually a happy time of the year. My daughter is 7 years old at the moment and she has exclusively had seizures while sleeping, where she’s completely absent, for the past 6 years. When she recovers from this, she often needs to throw up and she’ll be very upset. The day afterwards she’s very tired and often she doesn’t have an appetite.

The family has gathered and together we sit at the dinner table. My mother has cooked extensively and everyone is having a good time, including Isabeau. We always maintain a strict schedule when it comes to bedtime so that Isabeau gets enough rest and sleep. Near the start of the evening, we head home to put Isabeau to bed.

For the past 6 years, my wife and I have been taking turns to sleep next to our daughter, so that we wouldn’t miss a seizure. At the end of the evening, we go upstairs and it’s my turn to sleep next to Isabeau. It’s around midnight when I’m abruptly woken up by the vigorous shaking of the bed. I remember thinking: “What’s happening? An earthquake?” I turn on the nightlight and glance at Isabeau to find her shaking uncontrollably. I was scared to death and called my wife over. We quickly realized that it was a different kind of seizure. A tonic-clonic seizure. Thankfully she came out of it within 5 minutes. She was very sad and confused afterwards. Because of her developmental delay, she can’t talk and explain how she feels and she also can’t understand everything that we say; so we can’t explain to her what’s going on. Eventually, we managed to get some sleep.

Isabeau’s most severe seizures (tonic-clonic) persist, so we contact our neurologist again. Isabeau hadn’t taken any medication up until now, because the seizures had been relatively mild and infrequent and the neurologist said that the benefits of the medication wouldn’t outweigh the side-effects. But things have completely changed now and her epilepsy is worsening.

Conversations flow with the neurologist who informs us that the changes in seizures can be caused because she’s getting older and the connections to the brain get stronger.

Meanwhile, we get into contact with an Epileptologist, who can give us advice on how to detect epilepsy. Of course, two parents taking turns to sleep next to their child isn’t the most ideal situation, so we also decide to look into other methods.

Together with our neurologist, we come to a decision for Isabeau, we will be starting with Depakote as her medication, because, given her situation, it has the fewest nasty side-effects. After some time, we get to a dose that corresponds to her weight and has a tremendous effect on the seizures. Thankfully the number of seizures diminishes and we start to notice that things started to calm down in Isabeau’s head. She also sleeps better and she can concentrate better during the day. We also notice that she has more energy to be more active. Here and there some seizures slip through, but they are very different because the medication suppresses them.

Isabeau will turn 8 this month and the seizures are largely controlled. It’s wonderful to see her flourish, we see a completely different child, who is a lot more cheerful. It also seems like she can pick things up more easily, which in turn is superb for her development. We are incredibly happy with taking the step to start with the medication.

Yet we’re still left with the question: “How are we going to get to a point where everyone can sleep in their own bed so that everyone gets their rest, but where we’ll also be alerted when she has a seizure?”. The solution came from the Epileptologist because they advised the NightWatch. The NightWatch is an epilepsy detection system used while sleeping. The person with epilepsy wears a kind of band around their arm that very accurately measures their heartbeat and any movement.

The band is wirelessly connected to a base station and then when certain seizures occur, the parents (or those who take care of the person) with base station get an alarm.

We have contacted the company LivAssured who has developed the NightWatch with several large epilepsy organizations in the Netherlands and we have ordered our very own NightWatch! Fortunately, Isabeau isn’t reluctant to wear the bracelet, even without us being able to tell her what it’s for exactly. It has now become HER band. Every time she goes to bed she’s making me absolutely clear I have to get the NightWatch to put it on her lower leg. O yeah, Isabeau wears the band on her leg instead of on her arm, because otherwise, she keeps playing with it.

Isabeau has completely gotten used to her band and the system works well. Luckily we haven’t seen any tonic-clonic seizures since July 2018, thanks to the medication. There have been a few focal seizures, at which the NightWatch gave off an alarm. My wife and I both feel like it’s time to let Isabeau sleep on her own because we trust the epilepsy detection system. Miraculously this immediately goes incredibly well. Isabeau sleeps soundly throughout the night and we even have to wake her in the morning now! My wife and I can now sleep in our own bed and get more sleep ourselves, which is great! In the end, everyone needs enough sleep to function properly.

Our lives have changed quite a lot over the last 8 years. Now, Isabeau is on the right medication, and because we have the NightWatch; all 3 of us can finally get enough sleep. The positive impact on our quality of lives is huge.

Over the past few months, I’d been thinking about what I wanted to do with my life. I came to the conclusion that I want to help people who have similar challenges to that of myself and my family. So I contacted LivAssured and expressed that I wanted to get involved with the NightWatch. Well, everything went incredibly fast: I resigned from my permanent job as a Sales Director and on the 1st March started as Product Specialist for the NightWatch!