Keith talks about his son Thomas who has Dravet Syndrome

Our son, Thomas, is now 20 years old and lives with me and his mum Sarah. His older sister, Kate, lives in her own rented house and works for an estate agent. I gave up work as a service engineer about three years ago to be more available as a carer for Thomas. His mum works part-time for the Environment Agency. 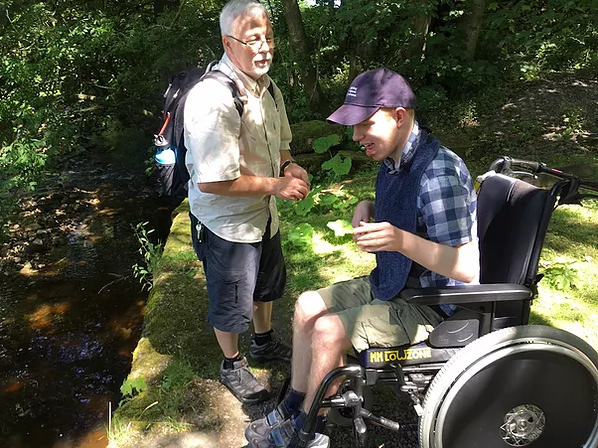 Thomas has a rare genetic condition called Dravet Syndrome which has been with him since he was five months old but was not diagnosed until he was 14 years old. The condition has caused him many problems including uncontrolled epilepsy, severe learning difficulties, autism, coordination difficulties, and sleep disturbances. He cannot talk, read or write. Life is tough for Thomas and our family.

Thomas has just started at a special college which is trying to help him improve his communication techniques. He likes college because he spends time with people his own age and is away from his boring Mum & Dad. At college they accompany him on the trampoline, go cycling with him and take him on trips to nature reserves in the college minibus. Thomas loves all this fun stuff.

By far the most dangerous problem for Thomas is the high number of seizures he experiences, always while he’s asleep. He can have up to 10 seizures of diverse types & duration every night. SUDEP (Sudden Unexpected Death in Epilepsy) occurs in people who have Dravet Syndrome more frequently than other epilepsy sufferers. Although Thomas takes anti-epilepsy medication, he needs help and medical intervention from his carers (mostly his Mum, sometimes his Dad) every night. When he has multiple tonic-clonic seizures in one night these completely exhaust Thomas and he can’t function very well the next day. He misses college a couple of times each week due to the impact of night-time seizures.

Thomas has a specially adapted bedroom fitted out with all sorts of high-tech equipment to help keep him safe. He has a bed with padded sides to stop him from falling out during seizures. When he is asleep we can keep an eye on him with sound and video monitors. We record all his overnight seizures and log them in a spreadsheet for regular review. Over the years we have used several types of monitors to alert us to his seizures. None are as good as his Mum at detecting seizures! 💜 However, she does need to get some sleep during the night, so we have to use a backup system.

Recently we discovered NightWatch and have been using it for a couple of months now. It works really well at alerting us to seizures and is dependable. It has never missed alerting us to a tonic-clonic seizure. The big advantage over other monitors is its ability to detect both seizure movements and heart rate changes during seizures. Another useful benefit is that seizure data can be sent to an online portal. This allows us to get an overview of how his night went and the recordings to give us a daily record of when his seizures happened. We can also see a full picture of his heart rate during each night. What we have learned, since starting to use the NightWatch, is that it takes a long time for Thomas’s heart-rate to come down to a normal level. After a tonic-clonic seizure, it can be 3-4 hours before it returns to his pre-seizure pulse rate. We were once told by a paramedic that the impact of a seizure is similar to having run a marathon!

I have had really good support from the NightWatch team at LivAssured. They always get back to me if I have any questions or need advice. They even suggested a better place to fit the NightWatch sensor on my son. His autism means he can be sensitive to certain situations and moving the sensor from his arm to his leg solved an issue. It works very well there!

We continue to search for medication to help to control Thomas’s seizures more effectively and improve his quality of life. There are some new drugs which should be approved for use in the next couple of years and we hope they can be prescribed for Thomas to continue the fight against uncontrolled seizures.